The business prospered through the decade until the “Great Chicago Fire” swept it away in 1871 [1]. Mr. Knowlton was the first to rebuild his business from the fire’s ashes, resuming operations within the same year. After being burnt out again, he joined the W. C. Ritchie Company. Here, he spent much of his time completing the invention of a paper box manufacturing machine, one that would later revolutionize the entire trade [6].

Between 1872 and 1880, Mr. Knowlton invented machinery for the production of rigid set-up boxes. Sold under the name of M.D. Knowlton & Company, this equipment included paper tube and gumming machines. He welcomed his son, Frederick K. Knowlton,  to join the company in 1879. 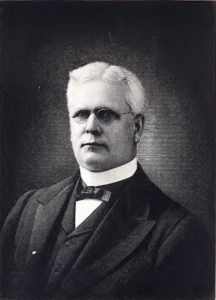 In 1892, Mr. Knowlton sold his interest in the paper box manufacturing portion of his business, devoting his full time to the invention and production of machinery. In 1888, he introduced the corner staying machine which lay the cornerstone for mechanized rigid set-up box manufacturing. In that same year, Mr. Knowlton formed a partnership with Mr. Fred Beach under the new name of “Knowlton & Beach” and moved the business to Rochester, NY.

In 1906, Mark Dean Knowlton died in Boston, MA, while on a business trip. He was succeeded by his son, Colonel Frederick K. Knowlton, US Army Reserve, who took over as President of M.D. Knowlton Co. During his time as president, the Auburn Ball Bearing Division was able to patent a number of new and innovative improvements to the design of thrust ball bearings under inventor Francis A. Collins, Jr in 1917.

The Company continued to grow under the direction of Colonel Frederick Knowlton until his death in 1939.

Colonel Frederick Knowlton passed the M.D. Knowlton Company onto his two daughters who hired an outside manager to run the business. The Company continued thru the war years and post-war years under family direction.

In September of 1962, the Company purchased the Langley Manufacturing Company of Cambridge, MA, which then became the Langley Manufacturing Division. The Langley Division manufactured a custom line of hydraulic and cable operated lifts and dumpers. With over 340 distributors in the U.S. and Canada, Langley accounted for approximately 70% of the business. Auburn Ball Bearing, selling mostly to distributors who supply replacements parts for OEM equipment, brings in some 20% of the company’s business.

In 1970, M.D. Knowlton Company moved operations to Victor, New York, where the Knowlton Building then served as the company’s headquarters [2]. At this point in time, the company consisted of three divisions: the Knowlton division, the Auburn Ball Bearing division, and the Langley division.

Early in the spring of 1971, Barcar Machine Company of Victor, New York, was purchased and became yet another Knowlton division. Barcar functioned as a contract machine shop serving primarily the greater Rochester area. All finished machining (both in-house and contract) was performed by the “Knowlton Division” which also continued to manufacture spiral paper tube and composite can equipment. Additionally, the Company continued to supply spare parts for its set-up box machinery still in operation.

In 1980, Kent Fellows took over as president of the Company, passed on to him by his mother and aunt. In the late 80’s, Fellows was faced with sinking sales and a receding custom base. This was largely a result of an outdated 19th century organizational style, inherited from founder Mark Knowlton and passed on unexamined through three generations.

In the 90’s, the Company was given a new lease on life. In 1996, under Fellow’s leadership, the Company began focusing efforts on increasing efficiency, cutting inventory, and using only existing cash flow. A few years later, these savings were used on initiatives to market the brand, to bring in new engineering talent, to implement new training for workers, to purchase new equipment, and to improve communication with customers as well as internal communication between engineering, sales, and management [7]. Additionally, in the late 90’s, the Langley Division introduced a newly designed lift and the Auburn Ball Bearing Division entered into the OEM market to help boost sales [7].

On August 18, 2006, Fairport Products, a designer and manufacturer of power transmission parts and equipment founded 14 years earlier, acquired the Auburn Ball Bearing Division of M.D. Knowlton Company. Its operations were then moved to the small town of Macedon, NY. The businesses continued to operate as two separate business entities until June 10, 2013, when the two companies became one under the new name Auburn Bearing & Manufacturing.

1.  Peck, William F. (1908). History of Rochester and Monroe County New York From the Earliest Historic Times to the Beginning of 1907. New York and Chicago: The Pioneer Publishing Company. pp. 530–531.

2.  “About Langley History”. Langley Manufacturing Division of the M.D. Knowlton Company. Archived from the original on 28 March 2012. Retrieved 21 July 2011.

4.  Peck, William F. (1908). History of Rochester and Monroe County New York From the Earliest Historic Times to the Beginning of 1907. New York and Chicago: The Pioneer Publishing Company. pp. 973–974.